What I Learned - The Curious Crime by Julia Golding

A very different sort of kids read discussing God versus science, and what happened in a society where people are shunned because of their religious beliefs, the colour of their skin, or even their sex.  The Curious Crime is certainly thought provoking and definitely a conversation starter. 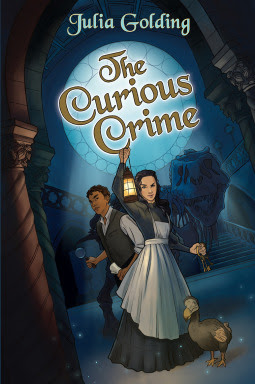 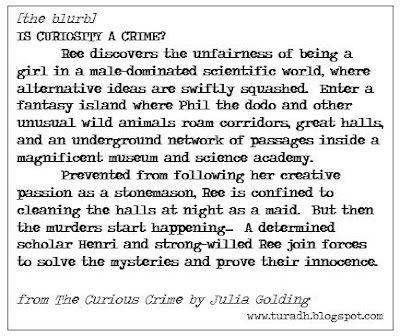 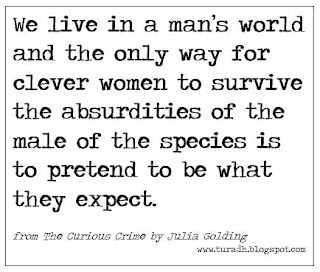 This reminds me of the immortal words of Mrs Banks in Mary Poppins.  "and though we adore men individually, we agree that, as a group, they're rather stupid."  This is one of my daughter and I's favourite lines in the film.  The sad thing is that this can still be true in todays society. 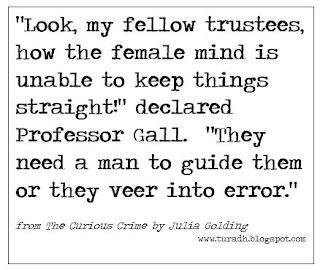 Pfft!  That's literally all I can think of to say.  Pfft!! 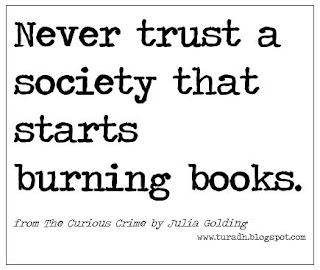 How true.  Books can represent an entire culture, a heritage and a real history.  I suppose that most of us read this and think about the Nazi's destroying Jewish books, but I was reading recently about how an entire culture has almost been wiped out in Syria...a whole history almost completely destroyed by the ongoing conflict there.  It hurts my heart to think that this is still going on today.  How great would a world filled with only love and tolerance be? 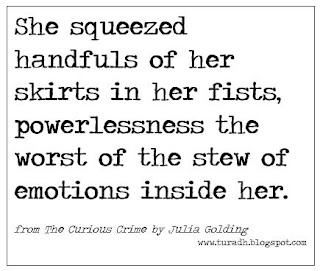 Powerlessness is, in my opinion, one of the worst emotions there is.  It's so difficult sometimes just to put your hands in the air, sit and do nothing and go with the flow - although less of a flow in my life recently and more of a raging torrent!  The trick is, I guess, to use everything you have inside you to stay positive and to be mindful of the things that are going the way you would like, and all the positive things you have that other people looking in would be grateful for.  I have been told recently that this is my superpower!  Don't get me wrong, it doesn't feel like it on the days that I sit on my kitchen floor and have a good howl, but that too passes and I always manage to pick myself up again. 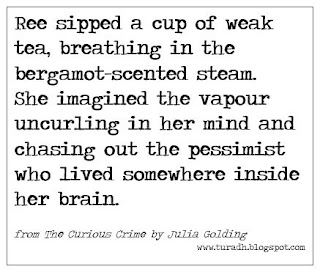 Tea: the quiet champion of uncurling minds everywhere and making things seem not quite as insurmountable! 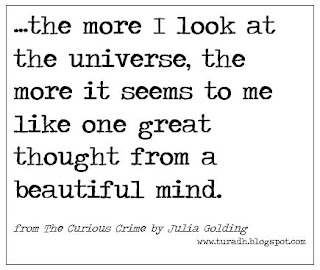 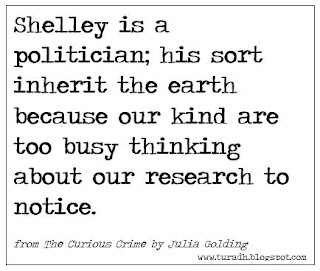 This made me chuckle.  How true is it that the people in power are often the one's seeking the power and the glory when it's the people working quietly in the background who are the one's affecting real change for the better.  This might not be a popular opinion, and I don't always (or often) agree with her politics, but I think the exception to this might be Theresa May...she took on a thankless task when she took on being Prime Minister for the Brexit negotiation...let's face it she always faced an uphill battle and was never going to please everybody, or even just some.  She took on an epic, almost impossible task, and I think that takes one gutsy lady! 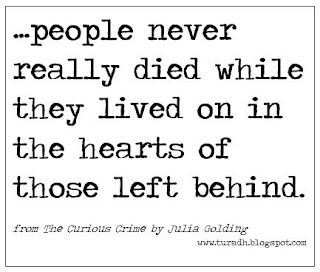 This is why we tell stories about the people we have loved, to keep them alive and to make sure that they are never forgotten. 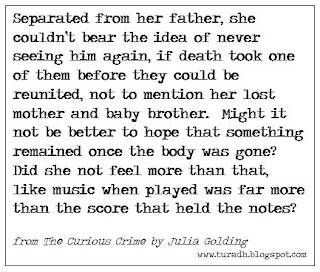 What a beautiful sentiment. 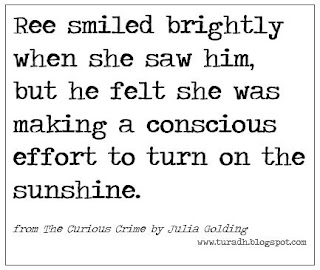 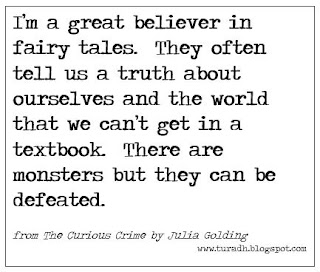 Fairy tales and books in general.  It's funny, I pick out these quotes as I am reading, but often when I go back and re-read a book at a different time in my life there are other passages that really speak to me.  Same with song lyrics...we all have happy songs, sad songs, and even just plain angry songs. 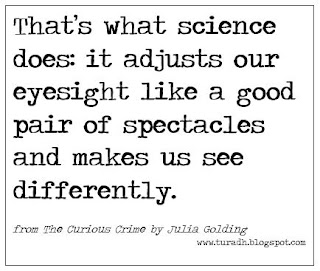 This needs to be painted on the science wall in every school.  Just a brilliant description. 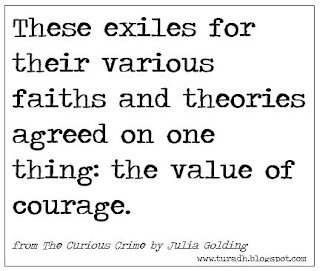 Courage, above all else, is what will save the day, every single time.  Whether it's the courage to let down your barriers and love, the courage to stand up to the people in the world that you know are doing the wrong things for the wrong reasons, or just the courage to get up and smile and keep putting one foot in front of the other.  Always, always be brave! 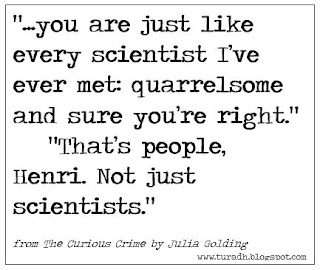 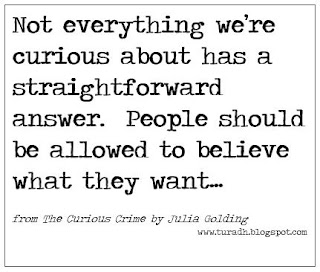 Just as long as their beliefs aren't harming any one else then why not? 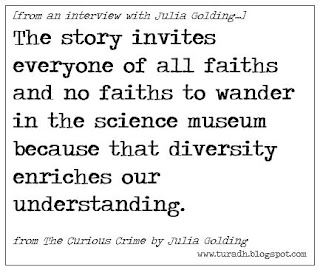 This is eloquently put.  Diversity in the world can't do anything but enrich our experience.  Always be open to learn from people from other backgrounds and cultures.  I've written about this before I know but I will say it again.  I recently had the privilege of spending some time with the First Nations people of Canada and learned so much from this incredible and amazing group of people. 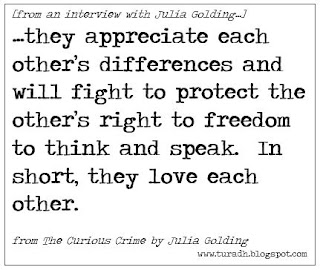 Again, just a beautiful thought.  Everyone should be free to think and speak and be themselves without reprimand or ridicule.

The Curious Crime by Julia Golding
My rating: 5 of 5 stars

I love and adore this book...beautifully written and a really thought provoking page turner that makes you stop and think. What would of happened if the past had gone a different way, if people's who's beliefs were different or who were seen as "the weaker sex" were ostracised and the world only belonged to a select few people? I think this book should be a must read for every child in school...it really makes you stop and realise what would happen if you dismissed whole groups of people based on their beliefs or sex. Read this book right now.

Have a look at my complete Julia Golding Reading List.

Thank you so much for checking out this review - if you enjoyed it please have a look at my complete list of What I Learned reviews.