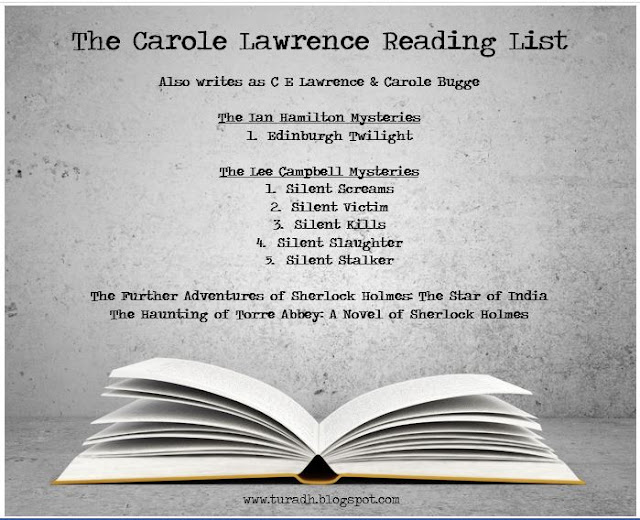 So far I've ticked off one of these books from my Carole Lawrence Reading List...click for my review of Edinburgh Twilight.


About the Author (taken from Goodreads)
C.E. Lawrence aka Carole Bugge' is the byline of a New York-based suspense writer, performer, composer and prize-winning playwright and poet whose previous books have been praised as "lively. . ." (Publishers Weekly); "constantly absorbing. . ." (starred Kirkus Review); and "superbly crafted prose" (Boston Herald). Silent Screams, Silent Victim, Silent Kills, and recently released Silent Slaughter are the first four books in her Lee Campbell thriller series along with her short novella Silent Stalker available on Kindle.

Her other works have been published under the name of Carole Buggé.

She has also been a featured guest on Canned Laughter and Coffee with Renee Bernard, Comedy Concepts with Nancy Lombardo, I…
Post a comment
Read more 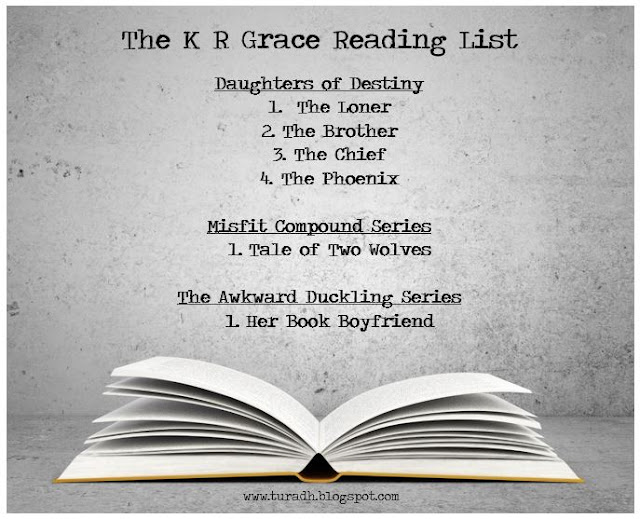 I've ticked off one of these books so far - click for my review of Her Book Boyfriend.


About the Author (taken from Official Website)
My name is K.R. Grace. When I'm not working the day job, managing housework, and wrangling with the dog, I write quirky romance novels.  I live in a small East Tennessee town, which is often the setting for my novels. While I moved around a bit as a child, I will always call the Smoky Mountains my home.  I've always had an overactive imagination. Whether it was story building with my Barbies or embellishing the events of what happened in school to make it seem more exciting (imagine aliens landing on the playground challenging earthlings to a dance-off. Cool, right?!), I was always "writing."  I'd love to say I live a exciting life, but I'm a total introvert. Give me my comfy pants, a binge-worthy show on Netflix, and a jar of Nutella any day. Okay, so I also like going into the mountains, boating out on the lake, and atten…
Post a comment
Read more 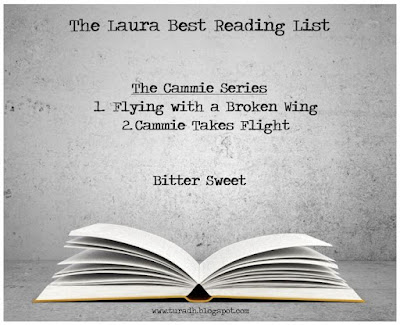 So far I've ticked off one of these books from the fabulous Laura Best - click to see my review for Flying with a Broken Wing.


About the Author (taken from Goodreads)
I live in Nova Scotia, Canada. In 2010, my first YA novel, “Bitter, Sweet” was shortlisted for The Geoffrey Bilson Award for Historical Fiction for Young People and made the 2011 Best Books for Kids & Teens list. I also write short fiction for adults. My work has appeared in numerous literary magazines and several anthologies. My short story “Alexander the Great” was nominated for the Journey Prize.
My YA novel,   “Flying With a Broken Wing,” was published in September 2013, and made the 49th Shelf`sMost Anticipated Books of Fall 2013 list and The Bank Street College Best Books of 2015 list.
I blog about my writing journey, books, and any little thing that catches my attention. Life is full of many wonderful things. We never know what is waiting for us around the bend. Being an author has given the me opportunity…
Post a comment
Read more 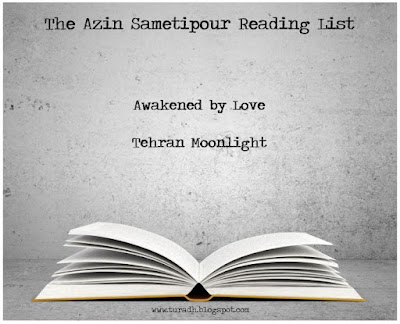 So far I've managed to tick off one of these books - click for my review of Awakened by Love.


About the author (taken from Goodreads)
Azin Sametipour's debut novel, Tehran Moonlight, set in contemporary Iran, was awarded a starred review by Publishers Weekly and Best in the House by Authors in the House@ Grubstreet/Muse 2015 Boston. She was born and raised in Tehran, Iran and moved to the United States at the age of 18. She currently lives in Northern California with her husband, two children and their cats.