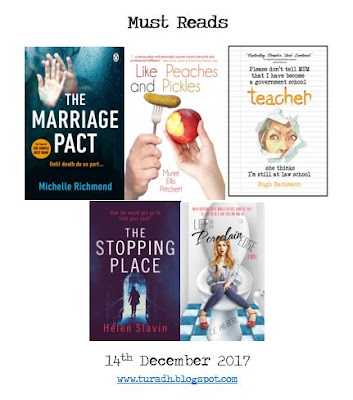 Here's some more lovely books I will be adding to my To Be Read list today:
The Marriage Pact by Michelle Richmond Would you stake your life on your marriage? Newlyweds Jake and Alice are offered a mysterious wedding gift - membership of a club which promises its couples will never divorce. Signing The Pact seems the start to a perfect marriage. Until one of them breaks the rules. The marriage of their dreams is about to become their worst nightmare. Because The Pact is for life. And its members will do anything to make sure no one leaves . . .
Like Peaches and Pickles by Muriel Ellis Pritchett The university's selection committee nominates Georgia Davis to become their first woman vice president -- a job she's coveted for more than a quarter century. But the university's new president, Paul Van Horne, sours her plans by ignoring the committee and hiring Carl Overstreet, his old college buddy instead. In spite of her outrage and better judgment, Georgia begins having roman…
Post a Comment
Read more
More posts