Happy Book Birthday to the following book which has been added to my To Be Read pile: 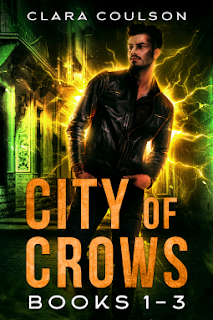 This bundle contains the first three books in the City of Crows series: Soul Breaker, Shade Chaser, and Wraith Hunter.

Soul Breaker
Cal Kinsey, rookie detective at the Department of Supernatural Investigations, catches his first real case: a vicious murder at a local college. A sorcerer has summoned a powerful creature from a realm of magic and mayhem and set it on a dangerous warpath through Cal's beloved home city.

Shade Chaser
A grisly triple murder in one of Aurora's most popular bars destroys the delicate balance between three powerful forces. A high-ranking werewolf, a seasoned wizard, and a former mayor wind up in body bags, and their deaths pit the ICM, DSI, and Aurora's Wolf community against each other in a blame game of epic proportions.

Wraith Hunter
A major Aurora convention centre collapses without warning, killing dozens and injuring hundreds more. With all signs pointing to a supernatural terrorist attack, Cal and his team are thrust back into the danger zone once again. And this time, they're playing for keeps.

I'm excited to read this book - watch out for my full review.